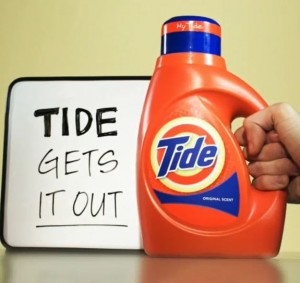 Were you watching your TV screen or your second screen during Super Bowl Sunday? Clearly, the four million dollar spots are only the beginning for the advertising brands. Their real-time marketing strategies drove additional value through millions of online impressions. Advertisers had social media war rooms with PR pros, graphic designers and, of course, lawyers, ready to take advantage of key moments to boost their bowl buzz further.

Twitter was on fire with fans chiming in on the #SB48 hashtag, and with advertising enthusiasts following the #rtmbowl (real time marketing bowl), #adbowl and #brandbowl hashtags and sharing their two cents. Right away, it was clear that the trend this year brands interacting  with each other. Here were the top three brand-on-brand real-time marketing moments.

1)   Tide responding on Vine – The team at Tide did an amazing job, reacting to other brands’ commercials with promoted Vine posts. They were endearing and clever, plus it was nice to see relevant and fun promoted posts at the top of my feed.

One of the highlights was the Cheerios ad response:

2)   JC Penney, tweeting with mittens? – It was, in a word, bizarre. It started with a post about mittens on the cold super bowl night, and then a few very odd tweets followed…

Other brands reacted quickly, assuming it was a drunken employee mistakenly tweeting, and with very funny responses. Snickers went the classy route, giving JC Penney the benefit of the doubt – low blood sugar perhaps? And offering a Snickers bar.

Kia was a bit more saucy, offering a designated driver.

The best moment by far was from the Good Morning America war room… tweeting with mittens:

It was risky, but in my book, a direct shout out from GMA makes this a win in the end. Fun stunt.

3)   When Verizon photobombed Doritos – We saw some great real time marketing for Doritos, who made a human chip which showed up on Verizon’s jumbotron:

Verizon capitalized on the moment, claiming the photobomb as their own, and having fun with the #sorrynotsorry hashtag:

What were some of your favorite real-time marketing moments last night? Share in the comments, below.

Related Posts: Monday Afternoon Roundup: Which Brands Rose to the Top in #Superbowl47 Broncos or Panthers? Do we even care? How the Super Bowl consumes us all. Super Bowl Ad Watch 2015: The Newcastle Revolution Here’s What Really Happens When a City Hosts the Super Bowl Ad Bowl XLIX: Who Scored, Who Flopped and Who Caught Us Off Guard Super Bowl 2016: The tale of underwhelming QBs and Ad spots
X