A Negative Trump Tweet About Your Company is an Eye Opener, Not a Crisis

President Trump’s address before the joint session of Congress this week is what most historians would consider to be a “normal” presidential communication opportunity.

But as we have seen, Mr. Trump has taken to Twitter like no one else in our time to state some of his points.

Companies should consider this a good thing, a wake-up call of sorts. It’s a way for them to check their crisis and reputation readiness before a significant event occurs involving their organizations.

In the old days, “When E.F. Hutton talked, people listened.” Today, when President Donald Trump tweets, companies listen. One thing is certain, President Trump has the most powerful thumbs in the world. He has captured the attention of investors and the media, and has sent CEOs around the world nervously checking their stock prices. This new administration’s unconventional use of social media may be exactly what the doctor ordered for companies who need a serious push when it comes crisis management. Just ask Delta Airlines. 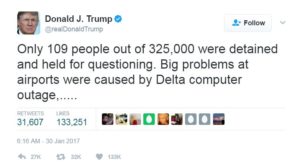 But as Green Bay Packers quarterback Aaron Rodgers told fans when the team was struggling, “R-E-L-A-X.”

The media likes to tell you that stocks tumble when Mr. Trump says something negative about an organization. Yes, we see some momentary reaction, but it is hard to make an argument that the impact is lasting.

Take Nordstorm. After the retailer dropped the Ivanka Trump collection from its stores, pundits anticipated a sizeable reaction and stock movement. But, in its earnings call this week, Nordstrom said the “Trump effect” was not really discernible in terms of earnings.

Much was made after Mr. Trump commented negatively on Boeing. One headline read “Did Donald Trump tank Boeing’s stock because he was mad about a news article?” After a dramatic headline and a graph showing the company’s stock price drop during trading, the paper had to concede that at day’s end Boeing stock actually traded up.

Real crisis situations, situations which can ruin a company’s brand, are around almost every corner. Being prepared to handle those situations is critically important. Presidential tweets appear to be passing.

Crisis preparedness is undeniably necessary in today’s world. Social media response and preparedness should be part of your company’s overall crisis management plan. A recent PadillaCRT poll of 100 companies revealed that 43 percent stated they are ready to respond to a social attack within 15 minutes, but only 19 percent have their messaging ready.

Here are three tips to keep in mind when responding to a reputation management issue on social media.

It’s worth asking yourself, “Are we ready to communicate effectively in a crisis? Can we effectively manage the social media storm?” To get a sense of your company’s level of preparedness, test your Crisis IQ now in this online tool offered by PadillaCRT’s Crisis Team.

Using the backdrop of the President’s address before Congress, we quote one of the nation’s Founding Fathers, Benjamin Franklin, who said,” If you fail to plan, you are planning to fail.” Plan before something bad happens to your organization.

Are you looking for advice on how your organization can be prepared to handle a social media issue? Here is a recent Buzz Bin post highlighting important crisis management trends for companies in 2017. Questions? Email our team: Bob McNaney, Brian Ellis, Stacey Stevens and Katie Priebe.