5 PR Lessons from the ALS #IceBucketChallenge 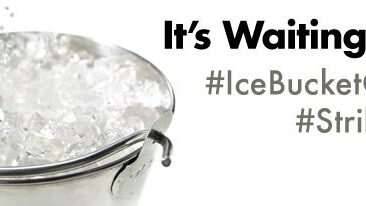 It all started a couple of weeks ago. You saw it on your Facebook feed: friends dumping a bucket full of icy water on their heads and then nominating others to do it as well, all for a good cause – ALS (Lou Gehrig’s Disease).

Then it was two friends on your feed… then five… then seven… then last Friday, it was Mark Zuckerberg.  At this point, you’ve probably done it yourself!

The ALS Ice Bucket challenge is the tidiest social media campaign we’ve seen in a while. It’s beautiful. And, the rules are such that it literally could not exist without social technology.  It has reinvigorated a medium overrun with high profile brands jockeying for likes and comments.

So, how did this campaign go viral, and what can you learn from it?

1) Be Genuine – Here’s the catch, ALS did not actually create this campaign. It started as a challenge to just give to charity in general. It became associated with ALS when it started gaining steam. Pete Frates, a former Boston College baseball player who was diagnosed with ALS, took the challenge on July 31, and the campaign took off. Because the campaign is completely genuine and has humble grassroots beginnings, it is that much more effective. According to research from Facebook, the post that started it all was from Pete’s personal page:

2) Connect People – Don’t connect with people as a brand, connect them with each other!  The ask is more powerful when it comes from a friend rather than an organization. The key to the ice bucket challenge? Tagging. By tagging friends on Facebook and Twitter, participants call them out in front of their friends, followers and, in some cases, the entire the social universe.

3) Tie in Visuals – What could possibly beat watching your friends pour ice water over their heads? Nothing. The ALS challenge would be nothing without our friendly phones to record them. Encourage visuals during your campaigns, rather than straight tweets or posts. The content you’ll see as a result will be far richer.

4) Know When to Chime in – Once ALS caught wind that this challenge was underway and driving massive donations, I’m sure it was tempting to jump in and make a lot of noise. But, the team was really smart. They saw the organic growth of the movement and just let it continue. They joined the conversation on Twitter, engaging with posts, but they waited until August 14 for their first press release, using it as a way to release their total donations to date, which are astounding. Take a look: 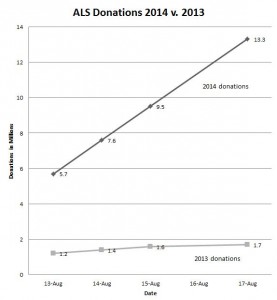 5) Tap a Celebrity – The right influential and social-savvy celebrity can give any campaign the boost it needs. In this case, any celebrity passionate about raising money for ALS is the right fit. From Bill Gates to Jimmy Fallon, celebrities have posted their videos, encouraging their fans to take part in the challenge and spreading even more viral growth.

And so, it’s our turn. Our agency’s president, Mark Raper, challenged EVP Mike Mulvihill over to participate yesterday. Since I wrote this post, I figured I’d be a good sport too. PadillaCRT is donating to ALS, and we’re challenging you to take the #icebucketchallenge and do the same! To donate online, visit: http://www.alsa.org/donate/