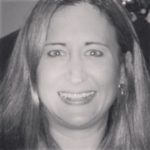 As Thanksgiving is a time to celebrate tradition, I am starting my own Booze Bin tradition by posting my Second Annual “Football, Turkey & Craft Beer Post.” You’ve been waiting for this post all year, haven’t you? Of course you have, because Thanksgiving is awesome! We all know Thanksgiving Day is about bonding: with family, with friends, with food, with conversation, with sports, with fall and with booze. So let’s combine them all, and pair up our Thursday football games with delish beer and food choices, this time with some new recipes and new brews.

According to the NFL, an average 28.4 million viewers watch football on Thanksgiving Day. And we all know that football and beer go hand in hand. That’s a lot of people, drinking a lot of beer. This year, the Minnesota Vikings will take on the Detroit Lions. Brrrrr, that sounds like a cold game. (Side note: Did you know that the Lions play EVERY Thanksgiving Day? Yep. Since 1934. Wondering why? Read the history here.) Food and beer-wise, you want to start out easy, as you know what’s ahead of you the rest of the day. So choose some simple appetizers with light-bodied beers. These less-hoppy beers—such as lagers, wheat and saison beers—are light in color, crisp, refreshing, and their food-friendliness and lower alcohol content makes them perfect starter beers.

Appetizers: Raw Oysters on the Half Shell and Caramelized Onion Dip

At this point in the day, you are building up to the big feast, ready to continue your beer/football/food frenzy. The dinnertime game this year is the Washington Redskins versus the Dallas Cowboys. (Dallas is the one other team that plays every Thanksgiving Day. True story. Read why here.) Time to break out some of the stronger tasting beers that will enhance various flavors associated with a traditional Thanksgiving meal, from herb roasted turkey to maple glazed sweet potatoes to spiced stuffing. These medium bodied beers—such as ales (amber/red, pale), IPAs and bocks—have malty qualities, intense flavor and higher hops, which makes them perfect pairing beers for your big meal. 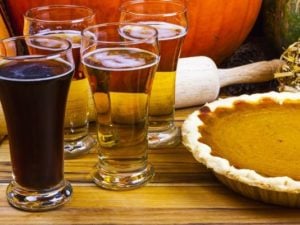 By this time, you may have put on your stretchy pants, but you know pies are waiting for you. And what’s Thanksgiving without pie? Your nighttime game this year is the Pittsburgh Steelers verses the Indianapolis Colts. Although it may be dark and cold outside, you will be warm and toasty in your post-dinner food coma, curled up with pie and beer (umm, yum!) I bet you’re wondering, which beers? Well in order to enhance the brown sugar flavor, along with the cinnamon, nutmeg and ginger in traditional Thanksgiving pies, try pairing a stout, porter or barleywine. These brews generally have dark, roasted elements, which produce flavors such as coffee and bitter chocolate, making them ideal pairings for spiced pie.

Dessert:  Apple-Pumpkin-Pecan Pie (why, yes, you can have 3 in 1!) and Double-Crust Apple Pie

Enjoy all your blessings on Thanksgiving Day and just BE. Cheers!