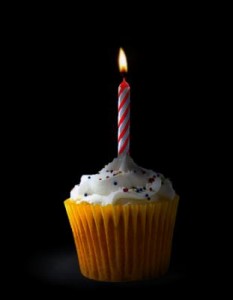 Last night, Tina Fey and the gang at “30 Rock” celebrated the show’s 100th episode. The episode was full of the standard anniversary clip montages and the ubiquitous lineup of guest stars including Michael Keaton, Rachel Ray, Matt Lauer, Brian Williams, Tom Hanks and Dean Winters, the actor who stars as Mayhem in the cool series of Allstate commercials and formerly of “Oz” and “Law & Order SVU” fame.

It was a pretty good episode, which got me to thinking, why do we place such emphasis on anniversaries and other milestones?

Art Markman, Ph.D., a cognitive scientist at the University of Texas, says that we impose a psychological order on the world using numbers that doesn’t really exist.

“Numbers are a mathematical construct,” Markman writes. “Yet, our perception of numbers is affected by our experience with them.”

He goes on to say that focusing on round numbers gives us a reason to mark landmarks in our lives by those numbers.

“We measure the performance of new Presidents by the activity in their first 100 days in office. We go to class reunions after 10, 20 or 25 years. In fact, many of the days, weeks and years in between landmarks may feel like a blur,” according to Markman. “We mark landmarks in time like birthdays and anniversaries as a way of remembering what we have done in that time period. They make the passing months and years more memorable.”

Given that we inherently find comfort in round numbers, it makes since that major numerical milestones, such as 25th, 50th or 100th anniversaries can be important occasions for reflection and celebration for companies and other organizations.

So what are some of the rules for making the most of corporate or organizational anniversaries? Here are five simple tips to consider.

1. Tie the anniversary to business goals. While milestone anniversaries can be wonderful opportunities to throw a great party for employees and other stakeholders, companies also should use the anniversary as a chance to re-enforce strategic business goals and objectives. Announce future growth plans or new initiatives. Carefully plan what strategic messages about the company will be conveyed in anniversary celebrations.

2. There is no substitute for meticulous planning. As the old adage goes, “the devil is in the details.” Planning for a major anniversary takes time. Some companies begin planning a year or two in advance. Remember that anniversaries are pretty commonplace. Everybody has one. So when planning, consider the types of corporate stories, information and events that will capture the attention and interest of the media in order to generate positive media coverage and engage stakeholders. Often, companies will tie anniversary celebrations to cause-marketing efforts, as an extension of their overall corporate social responsibility initiatives.

For example, as Eskimo Pie approached its 75th anniversary, CRT/tanaka helped promote the company through a partnership with the Smithsonian Institution. CRT/tanaka orchestrated a formal donation of more than 500 items to the Smithsonian amid a news conference and ceremony that became part of an exhibit on the history of ice cream titled “America’s Romance with Ice Cream.” Along with garnering major national media coverage, an estimated 10,000 people visited the National Museum of American History the day of the event. The Smithsonian requested that the Eskimo Pie artifacts be made a permanent addition to its archive collection, thus sealing Eskimo Pie’s place in history.

3. Don’t think of the anniversary celebration as just one day. Use the anniversary as an opportunity to plan commemorative events throughout the year. For the Centennial of Flight celebration, we used the year leading up to the actual anniversary to plan and promote events across the country. The actual Centennial celebration – which included a reenactment of the Wright brothers’ first flight in Kill Devil Hills, N.C. – was used as the culminating event of a year of celebrations.

4. Carefully consider appropriate commemorative marketing material for the anniversary. Is it feasible and cost effective to create a special anniversary logo to be used on all marketing material throughout the year? The commemorative logo should adhere to the already-established brand standards of the organization, and if possible, incorporate the existing logo into it. This anniversary logo can be used on collateral material, the company’s website and other commemorative items and gifts. The logo also should be incorporated into any company advertisement throughout the year. Some company’s even commission books or documentaries to commemorate significant anniversaries.

5. Money is an object. It’s very easy to get caught up in planning anniversary events and thinking of elaborate gifts for employees, investors and other stakeholders. Establish an anniversary budget as part of the planning process and stick to it. Remember tip #1 and make sure that everything planned and all expenditures allocated for the anniversary re-enforce strategic business goals and objectives.

When planning milestone anniversaries, it’s okay to celebrate and commemorate, but remember that an anniversary is just as much about the future of your organization as it is the past.