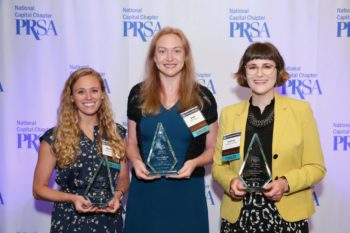 MINNEAPOLIS (Sept. 30, 2019) – Padilla, and its Joe Smith brand consultancy, have been recognized with three Thoth Awards given by the Public Relations Society of America’s National Capital Chapter (PRSA-NCC) for their work with Virginia Wine.

Padilla and Joe Smith were honored for their excellence in public relations and tactics in the following categories:

Virginia Wine, Padilla and Joe Smith developed a new brand identity for the organization and executed an external launch campaign that coincided with the 30th anniversary of Virginia Wine Month in October 2018. The launch rallied winemakers around a shared vision and amplified enthusiasm and local pride for Virginia wine among consumers. It resulted in spikes in social media followers, positive media coverage and helped position Virginia as a unique, world-class wine region for local, national and key international audiences.

The 51st annual Thoth Awards were presented on Sept. 27, 2019 during a luncheon at the National Press Club in Washington, D.C.

Each year, PRSA-NCC awards outstanding public relations in the national capital area with the prestigious Thoth Awards. The awards are named after Thoth, an Egyptian god of wisdom who was a mediator and scribe and credited as the inventor of communications and writing. In the spirit of Thoth, PRSA-NCC honors area PR professionals for their wisdom and contributions to the profession. Awards are given for the best PR campaigns and top accomplishments in PR tactics.