The Second Screen: Keep it Simple – Jimmy Fallon Gets it Right

Twitter, Facebook, Google, Amazon – these are where most of us are spending our time on the second screen. The second screen is the chronic TV watcher’s dream. Commercials come up? Back to Facebook. Boring plotline? Buy those headphones you’ve been eyeing on Amazon. Plot twist? Talk about it on Twitter in real time.

Marketers have been hard at work creating apps to take over the second screen – using it as another touch point for their TV shows, and another opportunity, of course, for advertising money. But, it’s taking some time to crack the nut… the app has to be engaging enough to keep people interested, but it’s important for it to connect to outside networks, particularly Twitter, to continue the global conversation.

The first TV show to do a clean, good job with a second screen app is the 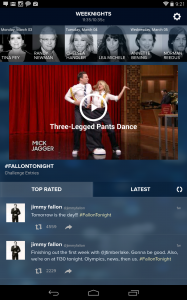 Tonight Show. The key? It’s simple. It doesn’t try to do too much.

3)      Upcoming guests: Across the top of the app, you can see photos of the week’s upcoming guests. Tap on their photo, and the app prompts a tweet with the guest’s handle or hashtag along with #TonightShow.

Sometimes, it’s not all about complexity and information overload. It’s so refreshing to see an app that’s simple and effective. That’s exactly what this second screen delivers.

Related Posts: Fallon Social Media Strategy: #GetJimmyWitIt Consumer Trends: 6 Apps and Tools to Help You Survive #BackToSchool Shopping Booze Bin: The State of the Wine App (Part 1) 20 Digital Facts That You Need to Know Is Twitter the “Social Soundtrack” of Today’s TV Shows? 3 Things to Ask Yourself Before You Pitch a Mobile App
X