The Hidden Health Benefits and Brand Opportunities in Pokémon Go

It’s official. Pokémon Go is taking over the world.

Maybe that’s a little exaggerated, but not by much. Over the last eight days since Nintendo launched Pokémon Go in the U.S., the app has quickly surpassed the number of daily users on Twitter and engagement on Facebook, and has broken the record for the biggest U.S. mobile game ever in terms of daily active users. The app was initially launched in the U.S., Australia and New Zealand, and just launched in Germany yesterday and the UK today. The company plans to roll out the app to additional countries in the near term.

How did Pokémon Go get so popular so quickly? The short answer: It hits all the sweet spots.

Pokémon Go is an important trial for augmented reality (AR) – and just the beginning now that an AR game has been adopted by the masses.

The post-launch aftereffects have been both positive (in-person meet-ups, discovering new places in local communities, even catching a murder suspect) and negative (people walking into traffic and unsafe areas, predators using the game).

But one of the biggest impacts of the game? The health of its users. 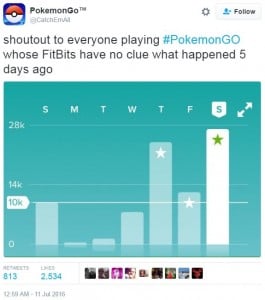 Pokémon Go has broken through barriers to getting people moving in a way that most health apps haven’t been able to do. As Gizmodo humorously reports, Pokémon Go users are suffering from a pandemic of sore legs due to accidental exercise. The game is healthy for users in more ways than one:

This is good for game participants – it is also good for health care brands that work to combat community health concerns, obesity and mental health issues.

So far, the opportunity for brands to leverage the Pokémon Go phenomenon has been relatively limited to social media postings, as there isn’t a space for brands in the app itself yet. That will change as the company has plans to incorporate sponsored locations.

The instant popularity of Pokémon Go can provide a great opportunity to brands. Keep in mind that however you choose to leverage this new game, it should be done in a way that will feel authentic to you and adds value for your audiences.

Have you developed any interesting strategies around Pokémon Go? Share them in the comments!