It’s a Jungle Out There: 3 Reasons Health Care Companies Should Look Out for Amazon

Recent unconfirmed reports have speculated over whether tech giants like Amazon and Apple are gearing up to tackle their next frontier – health care. With both companies being leaders in their markets, do they stand a chance of disrupting an industry where other tech experts, like Google and Microsoft, have failed? There are three reasons why Amazon and Apple may have a chance. 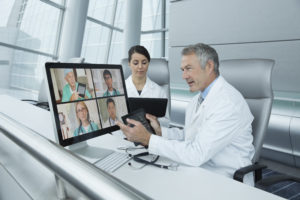 The digital health technology market is rapidly changing. Many health systems and insurers are moving over to electronic health records (EHR) systems for greater patient-centered care and the space is ripe for the picking. CNBC reports that Amazon is looking at opportunities that involve pushing and pulling data from legacy electronic medical record systems and make the data available to consumers and their doctors. Who better to accomplish this feat than a company with a reputation for secure online transactions and customer convenience? Amazon stands a chance at gaining market share because they are an established and trusted brand with credibility in records keeping.

Apple has also been hyped as another tech leader likely to enter the EHR market. Rumor has it they are working with a variety of health care organizations to find a way to make personal health records available on the iPhone. It turns out, even in 2017, different health systems have difficulty sharing data between them. Consumers who have access to their own records would be able to share that information with their care givers more easily than the systems would be able to communicate. Can a company whose name is basically synonymous with communication bridge the gap?

According to CNBC, the biggest challenge in entering the EHR market is that the people who care most about improved customer convenience are the chronically ill, which overall is not a large population. However, Micky Tripathi, president and CEO of the Massachusetts eHealth Collaborative and a health IT expert isn’t worried. “If any company can figure out engagement, it’s Apple.”

They already have health care offerings

Amazon is already established in the medical supplies industry, having sold and shipped products for several years. Recently there has been discussion in the media about the possibility of the company expanding into the pharmaceutical industry. With many Americans suffering under rising drug prices and deductibles, the ability to purchase drugs on Amazon AND have them delivered would surely be a game changer. It would also benefit the company financially. In this article from CNBC, Stephen Buck co-founder of GoodRx estimates that this would be a $25-$50 billion opportunity for Amazon, if they can navigate the highly regulated industry.

Apple is also in the consumer health space with their many health and wellness offerings. To enter the EHR market would certainly take the company’s health strategy in a different direction. But deviation can also mean innovation, which we all know Apple strives for. It wouldn’t be much of a stretch for either company to further expand their offerings into the health care industry.

Both have the existing consumer hardware

Apple and Amazon both own the existing hardware that hospitals, health organizations want to work with. Apple’s iPhone, which has nearly 700 million estimated users around the world, and its iOS software are desired programs for new health tech. Health practices and hospitals are currently exploring possibilities with the voice recognition technology available on Amazon’s Alexa and Echo. Owning the hardware and software technology gives these tech giants an advantage over competitors who are working to get their ideas on Apple or Amazon platforms.

Neither Amazon or Apple has responded to reports of future health care plans, but the possibility of having them enter the market is putting health care companies in an interesting position. We have seen tech giants come and go, but Amazon and Apple are proven disrupters and health care might just be their next frontier.

What do you think about Amazon and Apple’s speculated transition to health care? Share with us in the comments below!