Influencers: A Discussion about the Law of the Few

Above image and analysis: David Armano

This week’s Social Media for Social Good reading is Malcolm Gladwell’s the Tipping Point, which is a great starting place to discuss influencer relations. From a strategic standpoint, there’s no question: Online word of mouth or grassroots marketing requires the community embracing and spreading the message.

The days of build it and they shall come passed somewhere between the publishing of Naked Conversations and Groundswell. Without connectivity to the community and it’s influencers, a social media communications effort will likely fail.

There’s lots of hub-bub about influencer (or blogger) relations and best tactical practices. I highly suggest reading Toby Bloomberg, Todd Defren, Susan Getgood and Brian Solis‘s past writings on the topic. But this post is primarily about strategy, and which influentials to target and how. Thus, let’s begin with Gladwell’s Tipping Point. 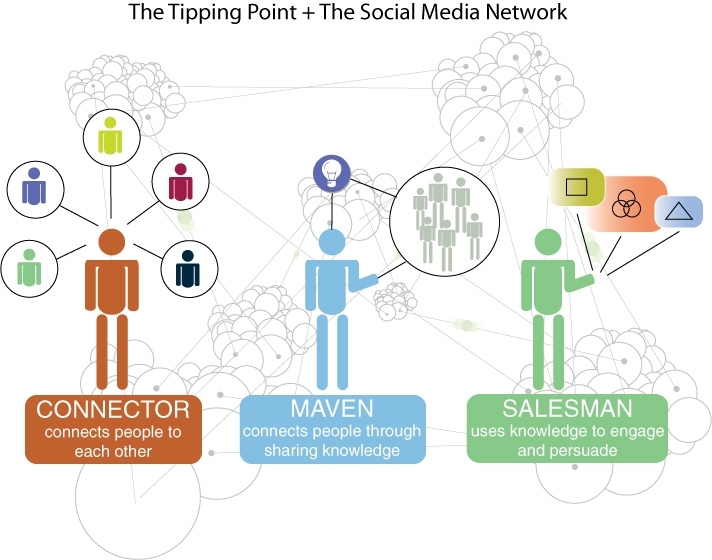 The book breaks viral marketing into three key components, The Law of the Few, the Stickiness Factor, and the Power of Context (image from the Digital Mindset blog). To me, Stickiness has already been covered in the Positioning lecture, and the Power of Context requires strategic analysis and research: A full understanding of the community, it’s motivators and it’s concerns. But the Law of the Few is fascinating as it offers a fantastic influencer relations strategy.

Specifically, the Law of the Few says there are three types of people who are necessary to start an idea epidemic:

The book uses lots of examples to highlight the theory, from Paul Revere’s ride to Hush Puppies. This model of approaching Connectors and Mavens is the usual PR firm approach to influencer relations: Hit the blog/influencer with the biggest reach. In many ways, this is a natural transition from media relations.

Yahoo’s Duncan Watts had a well-discussed counter point to Gladwell in [email protected] Company last year dismissing “The Law of the Few:”

…in the large majority of cases, the cascade began with an average Joe (although in cases where an Influential touched off the trend, it spread much further). To stack the deck in favor of Influentials, Watts changed the simulation, making them 10 times more connected… But the rank-and-file citizen was still far more likely to start a contagion.

So who’s right? Well, both are. I don’t think Gladwell meant start with the top necessarily. The Hush Puppies study showed some off-beat hipsters who started the trend, which was noticed by local, NY fashion designers. These kids were truly not that connected. At the same time, once the NY fashion designers did pick up Hush Puppies, it was lights out, so to speak.

Many A-List influencers (and even traditional journalists) won’t notice an idea until lesser, yet influential peers write about it. This “Magic Middle” tier of infleuncers — as David Sifry dubbed them in 2006 — often break stories, which trickle up until a “Connector” discovers the story. For example, Shel Israel is writing about the story of Casper Oppenhuis de Jong who was in a China bookstore when a 7.9 Earthquake struck and he helped inform the world through Twitter (via Robert Scoble and then the International media). One could classify this smaller influencer a Maven (sorry, Watts).

My personal experience is that many times you have to tickle an idea or story up the grapevine into the major A-listers, who are often late to embrace a story. However, once they do write something up there is great potential for word of mouth to occur, either through traditional media or further social media conversations.

The truth is that you really don’t know what’s going to create the ultimate viral campaign, but you do know that you need to talk to the few and the passionate. Those are your influencers, often leaders in the community to opt in. Getting the Huffington Post may not be an immediate option, but often a social media groundswell takes time as opposed to a flash flood of media hits. For organizational social media, this means targeting credible contacts that have the right people in their network, not necessarily the most people.