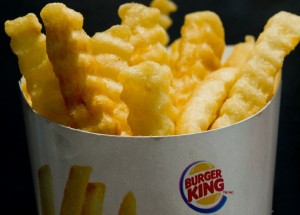 That’s because Burger King, less than a year after launching the low-calorie alternative to regular french fries, has decided to take them off the menus in about two-thirds of its North American stores. According to Bloomberg BusinessWeek, the fast food chain said in a statement Wednesday “that 100 million guests have ordered Satisfries, but the results were not persuasive enough for restaurant owners to want to continue serving them.”

Fast-food chains have worked hard to diversify their menu and offer healthier options (did you know you can get tuna salad on an English muffin at Dunkin Donuts?), but Satisfries have apparently missed the mark (even after the BuzzLine shared several tagline ideas at launch).

So what to replace them with?

In six words, what new healthy fast-food option might you suggest to replace Satisfries? Maybe…

Leave your new six-word menu item in the comments below. If we like yours best, you’ll receive a $5 Starbucks gift card – definitely enough for an iced skinny mocha or a reduced-fat turkey bacon breakfast sandwich.