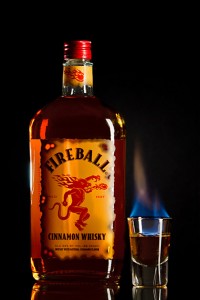 Have you heard the buzz about Fireball Cinnamon Whisky? Fireball is literally on fire.

The brand is one of the hottest liquors on the market. Fireball’s sales have even surpassed Jameson Irish whiskey and Patrón tequila. Fireball has increased its sales from $1.9 million in 2011 to $61 million last year.

How did Fireball do it? Old school marketing tactics with a fiery dose of social media magic. Here’s a look at the Fireball craft:

Bought patrons shots and merchandise
Fireball bought entire bars a round of shots. It also rewarded patrons with free merchandise ranging from Fireball lip balm and swimwear to beer openers.

Encouraged branded social events
Brand ambassadors would encourage bars to post photos of patrons enjoying Fireball in creative ways. The brand would then share them via Twitter, Facebook and other social media channels, increasing customer engagement.

Enlisted the cool crowd
The brand engaged celebrities who have large followings online. For example, Josh Harris, who stars in Discovery Channel’s “Deadliest Catch,” posted about Fireball on his Facebook page.

Mission accomplished, Fireball is a trendy brand. The real spice is fending off competitors like Jägermeister, Jose Cuervo and Jack Daniels who are making their own cinnamon-flavored imitations.

Can Fireball stay on fire? Only time will tell.