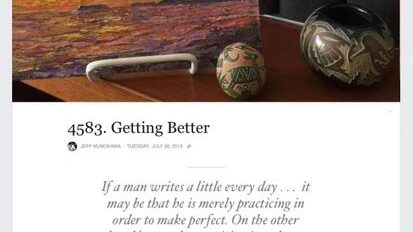 Remember Facebook Notes? Eh, maybe. Personally, the last time I used them was when I moved away from Charlottesville in 2009 and made a list of the restaurants I wanted to hit before I left town. That was right as mobile usage started to climb, and Facebook became a hub for iPhone photos and instantaneous updates, rather than the premeditation required to create a Note.

And so, they fell by the wayside, until now. Last Friday, Facebook released a slew of new Notes features, encouraging users to consider using Facebook as a blog. LinkedIn led the way with this strategy when it introduced Publisher last year, which allows the platform to function as a personal business/thought leadership blog for users. In LinkedIn’s case, the best posts from Publisher were picked up by the network’s newsreader, Pulse, increasing reach for selected users exponentially.

What does this means for brands? Get posting! You now are able to use text formatting tools like quotes, bullets and cover images. Have a food client? Post your latest recipe. If you have a company blog, pick and choose some of your favorite posts to repurpose using the Notes feature. Most of all, experiment. The most fun part about working in social media is how often it changes. Stands to reason that Facebook may release a feature similar to Pulse at some point and highlight some of the most popular Notes. That could be you!

Share with us. How do you plan to use the updated Notes function?