BuzzLine: Rip Open a Cold One

After nearly 80 BuzzLine posts, we’re making a couple of changes.

Starting today, you’ll see the BuzzLine appear the first Friday of the month instead of every Friday. Play anywhere you come across the BuzzLine (on the Buzz Bin, Facebook, Twitter, etc.), and, if we select your six-word reply, we’ll reward you with a $20 Amazon gift card.

With all that dough, you can get a scone and a cake pop with your latte. Or buy some bird seed instead. Or some car air fresheners. Up to you! 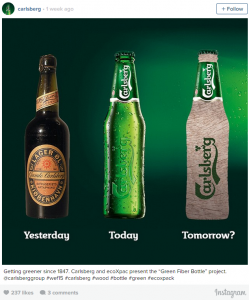 Last month, Carlsberg, a huge Danish brewery group that owns hundreds of beer brands and sells north of 35 billion bottles worldwide annually, announced that it would introduce paper bottles within the next three years.

According to the company, the bottles (baggles?) will be 100 percent biodegradable, generate zero waste, comply with the strictest food and beverage regulations and not mess with the taste of the beer they hold at all.

I’ll drink to that.

And I’ll give you six words to come up with a new tagline, call to action or pithy observation of the new, eco-friendly and socially responsible paper beer bottle. Something like:

Leave your six-word BuzzLine in the comments below, on Facebook or Twitter (with #BuzzLine, please, if you tweet it). If we like yours best, cheers! We’ll get you the gift card in time for happy hour.