A Shift from Local to Locale

As we celebrated Independence Day last Saturday with hot dogs and fireworks, Unesco, the cultural arm of the United Nations, announced for the first time that agricultural regions and production would receive World Heritage status. The vineyards and production of Champagne and Burgundy were recognized for their “very specialized artisan activity” that has come to distinguish the two regions.

As consumers demonstrate an increasing awareness of where their food comes from and how it is produced, a return to traditional techniques and craft production has followed. Thanks to people like Anthony Bourdain, we are much more interested in the stories behind our food; the chef, the restaurant, the place. It is this sense of place that sometimes is lost in our desire to celebrate local. Certainly there are foods that benefit from local production and sourcing, however, there is also the matter of “locale” or terroir that goes into some of our most celebrated foods. 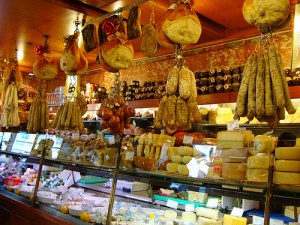 Europe has been at the forefront of protecting some of their most prized and historic foods through their PDO/PGI systems for wine and food. Geographical indicators help to protect these time-honored foods such as the triumvirate from Emilia Romagna of Prosciutto di Parma, Parmigiano Reggiano and Aceto Balsamico di Modena. Each has its own unique history and story tied to the region, and cannot be produced anywhere else in the world.

In the U.S. we have some examples of regional designation from Vidalia onions to Idaho potatoes, or Maine lobster to Napa wines, however, we are well behind the EU when it comes to identifying and protecting unique origins. Nearly 1300 products are registered in the EU system, and more than 130 more have applied. Many of these names have evolved to a product identity beyond the place from whence they came, which has been a problem for the producers and the EU. In addition to having to defend their production techniques, they also have to protect their name from imposters and confusion.

Communicating the significance of “locale” is a bit more nuanced. Even when there is not a personal connection, you still have the opportunity for an emotional connection. Perhaps it is from a grandparent speaking of the “old country” or a romance with a place never visited. There is always a story to tell, which is where the opportunity lay. Story telling is returning as an integral element of communication. For a time it felt like the soundbite or headline was the way we were headed. As we moved to a world of 140 character communications, we feared depth would be lost. This isn’t the case. We may still only have 140 characters to pique someone’s interest, but the desire to learn more gives us a chance.

A recent study revealed the human attention span has deteriorated to shorter than a goldfish. Our need to simplify things to a number, whether calories or food miles, seems to fly in the face of progress in education marketing. As marketers, we need to be savvier to reach them in the right place, at the right time, through the right medium. It isn’t that they don’t care, but we do need to give them a reason to, preferably in 8 seconds or less.